As you walk closer to the Huntington Beach Pier, it can be tempting to see where the music is coming from. Although there is another part of you that might want to keep walking, you come to find that it is not just any event, but the Beachside Summerfest. 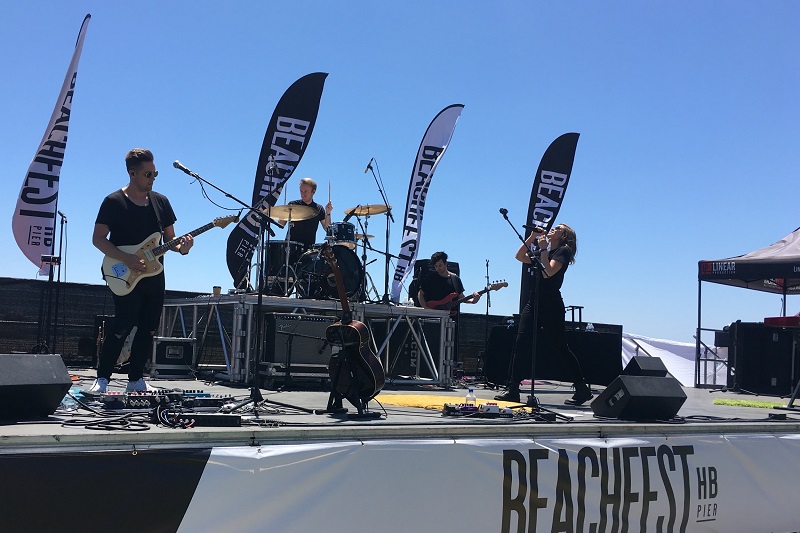 Enterline performing from their album “Kingdoms” at the 2019 Beachside Summerfest at Huntington Beach.

Presented by Calvary Chapel Beachside (CCB), the festival is a platform in which the church is brought to the beach in an effort to grow it’s community. An annual event, the festival, which is also dubbed Beachfest HB, returned with live music, an open air market, and live sports demonstrations for the community – all for free.

Before we go on to the finer details of the festival that took place June 8th, here are some details about CCB and how the Beachfest got started.

The first Beachside Summerfest took place in 2005 at the Huntington Beach Pier formed by a collaboration between CCB and “about five other area churches” according to an article by Calvary Magazine. Since then, the event continues to reach out to the community through a religion they all share.

The magazine interviewed Steve Harrison, assistant pastor at Calvary Chapel Beachside, who talked about how CCB’s request to host the event got denied for several years.

It was then that “a personal friendship between a CC Beachside member and a city official eventually cleared the way for more extensive communication. Ever since, the believers have made maintaining a good relationship with city officials a priority.”

It was later revealed in another article that the mysterious CCB member turned out to be a person by the name of Bob Jones.

Jones reportedly knew the mayor, who was also a believer, and approached her personally. Although the festival was opposed for being an “openly evangelistic event,” the mayor convinced city officials to accept permits regardless of its religious association.

The mayor made it clear that people should be welcome to submit permits regardless of whether they are Christian or not.

CCB is a church that offers a close-knit, family environment to its membership, which is apparent when you look around at the crowd of people. They all range in different ages, helping themselves to activities that appeal to them personally, whether that meant a performance on stage or a live skateboarding demonstration.

This makes the Beachfest the perfect opportunity to combine these common interests to appeal to the adults in the community as well as its youth members.

While the CCB is a church that consists of ministries targeted toward a variety of age groups, one that stuck out was the ministry for children. The church seems more intent on helping kids weigh out their religious beliefs before they graduate high school. The idea is to reach out to kids once they begin to doubt their relationship with God.

The date chosen for this festival is not an accident. The Beachfest takes place the day before their Sunday service.

Additional details can be found on the Beachside Summerfest Facebook page.

As one post reads, Beachfest HB is “[a]n event [designed] for the local beach-goer, the first-time surfer, the aspiring skate boarder, the visitor passing by, the family of five, the nearby neighbor, the community of Huntington Beach.” It is an attempt to bring church to the beach as it is not limited to being at a building all the time.

Calvary Chapel is not only in the US, but in the UK as well- particularly, Ireland.

CCB’s impact on the community

Beachside Summerfest proved to be the gateway to spiritual commitment, as ten baptisms were performed at the event according to their last Facebook update. If you are interested in glimpsing into this life-altering moment, here’s a short video where you can see a child being supervised as he walks into the ocean.

In a nutshell, Beachside Summerfest brought the community together as they listened to testimonials, the religious equivalent to baring one’s soul for all to see,.

Here’s what happened at the Beachside Summerfest

Anyone passing by could easily hear the music from about a quarter-block away. As you walk closer, you could see the crowd of people either sun-bathing on the lawn or sitting on the outdoor amphitheater. Among the members of the audience, there were some who seemed to have arrived before the rest, well-prepared as they sat in their cooler chairs. Others came alone to see what was going on before disappearing somewhere else.

However, those who stayed got to see the next guest enter the stage.

Nate Dorman, a professional surfer, came to talk about his faith in God during his journey as an athlete. Who is he? This is detailed on his website. Dorman’s bio reads that he is currently “traveling around the world on the World Surf League World Qualifying Series earning points with the goal of qualifying for the World Championship Tour.” 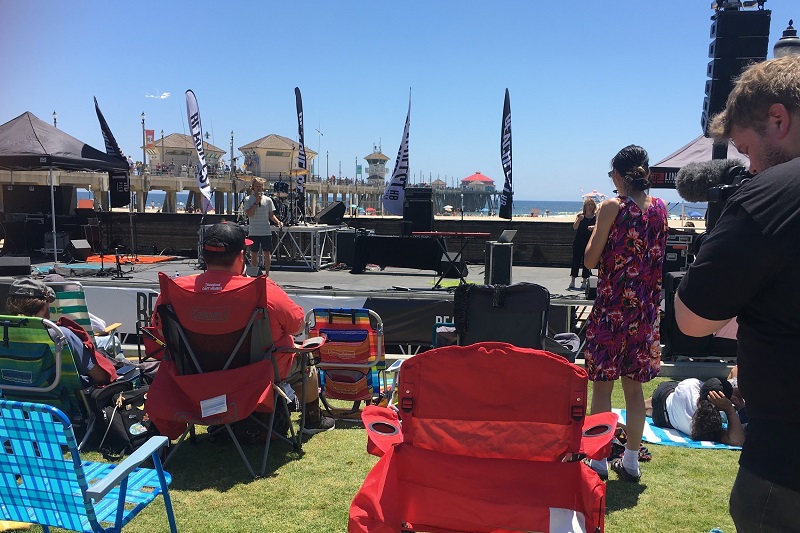 Nate Dorman, professional surfer, speaking from the stage with a bible in hand.

With a bible in hand, he opened it to read Ephesians 3:17-19. It was at that moment the audience got a glimpse into his life not just as a surfer, but a pastor. His exit off the stage was soon followed by Enterline, a husband-wife duo from Costa Mesa, who performed songs from their latest album, “Kingdoms.”

Admittedly, the only time I had ever listened to Christian music was almost a decade ago, when I was a sophomore in high-school playing The Afters on my iPod Nano. Since then, I’ve heard decent and sometimes not-so-appealing Christian music, but Enterline’s tone seemed warm and easy to get into.

Enterline performing from their album “Kingdoms” at the 2019 Beachside Summerfest at Huntington Beach.

Melanie, the vocalist, sang lyrics with a voice reminiscent of Halsey-meets-alternative rock, but slightly softer. Her husband, Drew, stood close by as he supported her voice with an electric guitar.

Of course, we can’t forget the other attractions besides the music. Throughout the event, locals and spectators were also free to watch skateboard tricks, which appeared to attract about one-sixth of the festival crowd. 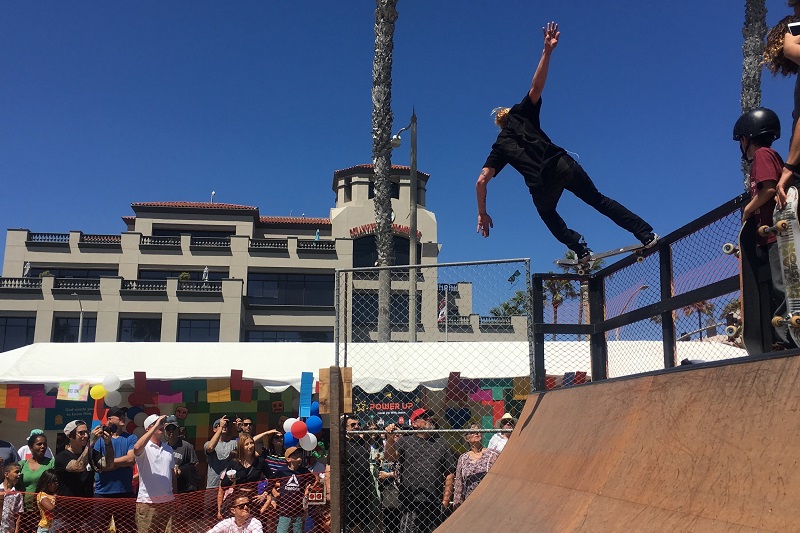 Onlookers watched as a skateboarder performed a stall maneuver.

Aside from the live skateboarding demos, several vendor booths lined up against the walkway nearby.

There were booths set up for ELISAMAMA Kids and TRAIL FORTY for clothing; Sara Pilchman Ceramics and Classic Currents Jewelry Co. among a few others.

The festival continued as Lily-Jo, a UK artist, appeared on stage. “Smile,” one of her more synth-electrical-themed songs is dedicated to cyber-bullying, demonstrating her stance as a mental health counselor.

Her songs dabbled in bits of pop and dubstep, two genres that distinguished her from other artists in the line-up. On top of that, audience members responded with dancing and clapping their hands in unison. Lily-Jo’s performance not only drew attention from the audience, but it also ended her four-state tour across New York, Washington, Oregon and California. 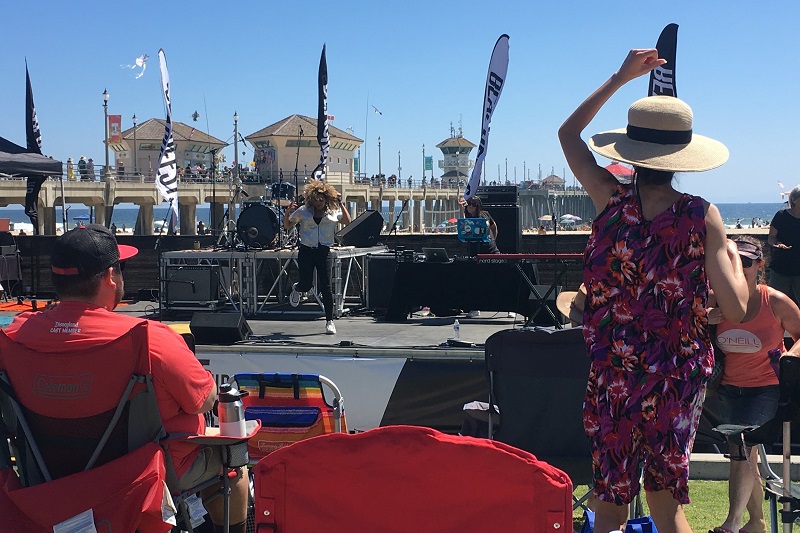 Although her music did not suit my personal tastes, seeing her perform on stage was refreshing for diversity’s sake.

The event continued with a performance by Propaganda, an LA-based artist, whose lyrics are influenced by political activism. He also taught us how to do “the walk” that we apparently should be doing at a karaoke bar while Aretha Franklin played in the background.

Propaganda is one of the artists to return to Beachfest this year. Kings Kaleidoscope, a rock band in the Saturday’s lineup, also performed for Beachfest HB only a few years ago. I had heard of them at church, but never really got a chance to connect with their music through a live experience.

Propaganda was then followed by Leo Vieira, founder and program director of DOJO and an avid surfer. Vieira came out on stage to talk about Jiu Jitsu and the religion that brought everyone to this festival together.

Along with CCB, the event was put on by Calvary Chapel Costa Mesa; K-WAVE 107.9 FM, a Christian radio station; BRANCHES HB, another local religious organization; and Calling All Skaters, another ministry.

To start off, Calvary Chapel Costa Mesa (CCCM) is a bigger, more diverse collection of ministries, consisting of cross-cultural ministries for the Hispanic, Korean, Persian, Japanese and Arabic communities.

Next up is K-WAVE, a radio station and one of CCCM’s ministries. They air 24/7 to preach, teach, worship and share music that based on individual understanding of the bible. They also answer questions about the “good book,” which can be interpreted in a variety in ways.

Then there’s BRANCHES HB and Calling All Skaters.

BRANCHES HB is another religious organization that aims to increase its number of believers. Calling All Skaters (CAS), on the other hand, is similar although it appeals more toward high-schoolers and adults who are groomed to become missionaries.

CAS is a ministry within the skateboarding community that also aims to increase its numbers through teaching others within the community and internationally.

From another angle, Beachfest HB gives kids a modern approach of getting into Christianity.

“We see the 15 year old kids slumped against the fence at skateparks, drunk and high. We see the upside down crosses and 666 painted on their griptape. We see that the only role models they have are the guys they watch in skate videos and the 25 year old guy at the park who supplies the alcohol to the teenagers,” reads a paragraph on CAS’s website.

Attending the Beachside Summerfest as a Non-Christian

Other than committing and conforming to Christianity, non-religious people like myself had the option to just observe the event, at least.

As one who doesn’t share Christian beliefs, I was honestly lost and confused by the bible references and stories of how people were saved in spirit through their faith in God.

Despite not being non-religious, I showed up to Beachfest HB with an open mind, ready to make another memory I will never forget. I didn’t judge the people around me or the ones on stage.

Sure, I view the world differently, but I still took a moment to appreciate the significance of how one religion brought this many people together to one place. If anything, I respect everyone I saw at Beachfest for believing in their God and putting this event together.

Did this make me want to consider Christianity as my own religion? No. However, I do think Beachside Summerfest is a very well-thought-out way of getting people together whether they are religious or not.

What makes it stand out is the fact that the Beachfest is a way for the religious groups to reach out to people passing by or simply within the Huntington Beach community -just not in a forceful way.

There was a lot of variety for those whose interests were not only in the event in itself, but for the merchandise on display. If you had no interest in anything at all, then there is some diversity to the event that could make anyone take a moment to stay.

Here is a video recap of the event from the Beachside Summerfest Facebook page: